edit
September 18, 2020
Getting rid of the Credential Helper Selector on Git for Windows
table of contents

#Getting rid of the Credential Helper Selector on Git for Windows

If you've ever been tormented by the following pop-up when trying to push or pull from an HTTPS Git origin: 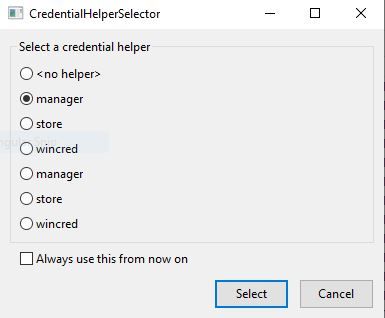 There may be a way out of your misery. Initially I thought that if I added my Git credentials for the respective remote origin directly into my .gitconfig file, Git for Windows would stop prompting me every time I wanted to push or pull. Nope. And even more painful is that for some unknown reason the pop-up would appear twice no matter what -- even if I selected Always use this from now on.

First off, you can simply choose to not install the Helper Selector by unchecking a box during the installation process of Git for Windows. This is assuming you are installing Git in this manner, and also that you are willing to reinstall Git for Windows entirely or re-run the installer. But what if this doesn't apply to you?

I installed Git using scoop.sh, so my installation process took place entirely via CLI. However, I guess this option also assumes you want the Credential Helper since I don't remember ever specifying I wanted it. So what now?

#Setting your credentials on an individual repository basis

Now that you've disabled the system-wide helper, you can manage your credentials on a repository-basis. Git provides two built-in solutions. I chose to use the store helper on my repos.

Navigate to your repository and run:

This will then prompt you for your remote credentials. Now try running a git pull and marvel at not having to be bothered by a pop-up!

#Why are you using Windows?

I never claimed to make wise decisions. But yes, this issue is nonexistent on my Ubuntu-based laptop, and probably on your Macbook Pro too.